Alternative Social Media for Businesses to Try in 2021 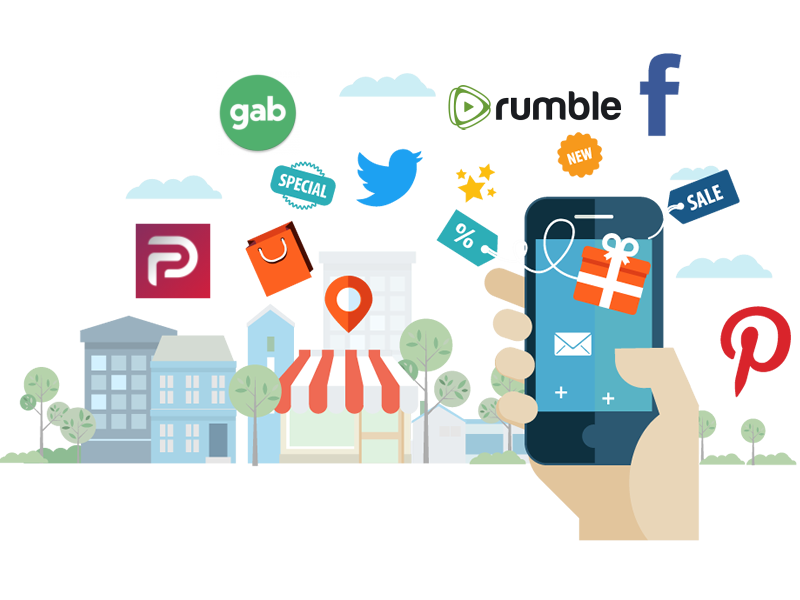 Amid the ongoing debate over the excessive censorship of conservative figures on major social media platforms, large shares of Americans are migrating to unbiased social media platforms. Facebook’s latest report reveals a decline of more than 2 million active users in the US and Canada during Q3 2020. And it’s no surprise at all. Many users feel that authenticity has been lost with large social media platforms actively censoring speech, controlling news feeds, and risking user privacy.

And they’re not merely routine users. Businesses are leaving, too. With real interactions with brand followers becoming less frequent and organic reach hitting all-time lows, many in the business world are turning to lesser-known social media platforms to promote their brands and creative solutions.

This insurgence in technocracy has pushed conservative influencers to create a social infrastructure wholly separate from the mainstream. For them, the future could be the emergence of unbiased, bipartisan platforms rooted in open discussion ideals.

In practice, these platforms are more than just a symbolic gesture. They are a functional improvement to what social media should be like. Social media giants are at crossroads and slowly collapsing. Platforms like Parler, Gab, MeWe, and Rumble are working to decentralize Facebook, Twitter, and YouTube’s global influence on the social media market.

If you’re looking to diversify your social media beyond large social platforms, the alternatives below might be your best bets yet.

Gab is a social network that empowers creators, promotes free speech, and defends the free flow of information online. Gab stands for bringing together people of all races, religions, and creeds who share the common ideals of Western values, individual freedom, and the free exchange and flow of information.

Silicon Valley entrepreneur, Andrew Torba, founded the app to capture influencers who have been banned from mainstream platforms.

Gab cast itself as a platform where free speech can flourish and is adding thousands of new users each day. In a recent tweet, the website claims to have gained over 10,000 users an hour and received “12m visits in the past 12 hours” just before 11 a.m.

Gab is similar to Twitter, except without all of the censorship. But the layout is quite similar. In the middle, it shows trending posts, aggregate news to the right, and a menu to the left to explore.

Although there is currently no paid advertisement, Gab provides an opportunity to connect with your audience by leveraging influencers in your niche and growing your reach. The visual interface is user-friendly and elegant, and they remain to provide a haven to users who prefer alternative social media sites. www.gab.com

CloutHub is a next-generation social network that allows users to tell, share, create, and read the news in one place. The political networking app was founded in 2019 by Jeff Brain on the premises of upholding personal privacy and free speech.

Clouthub is poised to be to community and politics, what Linkedin is to business. The platform marks the dawn of a non-partisan, clean principled site, that does not silence dissenting voices.

Although the platform does not reveal how many users signed up, it currently ranks #5 in social networking apps on the App Store. The California-based platform is also backed by many social media and political influencers, including Google’s product development director, Ravi Narasimhan, General Michael Flynn, and President Donald Trump – to name a few.

CloutHub makes up for a shortcoming in the social media market for a multi-functional platform that moves past the self-serving nature of the mainstream social networks to using social media to address local, state, and national issues.

Unlike any other app, Clouthub is an all-in-one platform that offers tools tailored to ‘doing’ rather than just ‘posting.’ Members get to join and form groups, engage in forums, follow news feeds, watch and post videos. At the moment, Clouthub is only available in the US and Canada but will expand internationally soon. www.clouthub.com

Since its launch back in 2012, MeWe has been at the forefront of the next-gen social network movement. The network is technically owned by Sgrouples Inc, a California-based social networking service provider.

There are a number of similarities with Facebook, But MeWe has a much stronger emphasis on data protection. No data mining, no algorithms, and no paid ads to manipulate the content you see on your news feed.

For businesses, that means there are opportunities to leverage organic reach. Companies are now setting up pages and communities, much like Facebook’s, and communicating more intimately and transparently with followers. www.MeWe.com

Established back in 2018 by John Matze and Jared Thomson, Parler is a free web app founded on the premises of “free speech” and an alternative to conventional social media.

Parler has seen tremendous growth in its user base and attracted over 10 million users in the last few months. The Parler app was downloaded nearly a million times within the first week of November and remained the most downloaded app in the United States, where it was the most popular free app on both the Apple Store and the Google Play Store. Then due to Apple, Google and Amazon censorship, they were dropped by their stores and were offline immediately after that. In addition, there have been reports that the AWS server was hacked and information removed. We are monitoring the situation.

For someone who has used Twitter, Parler provides a very familiar experience. You can follow other users and connect with them and publish your own public posts.

There are no paid advertisements when it comes to social media marketing. Building an organic audience or working with influencers in your market is the best way to use this tool. On Parler, a great deal of the same Twitter marketing hacks can be used.

In the future, Parler hopes to monetize its platform by linking influencers for a fee with brands. However, the advertisement model is still in the beta stage, so for now, you will need to search out influencers on your own. It also presents unique monetization and marketing opportunities, as 97% of users are from tier 1 countries, and the platform was getting bigger before the outage and hacking.  www.parler.com

Founded back in 2013, Rumble is one of the world’s fastest-growing video platforms that helps creators manage, monetize, and distribute their videos. The video hosting platform is quite similar to Vimeo and Youtube, though they do not obliterate free speech.

The video-sharing platform has over 350,000 independent content creators and partners with MTV, Yahoo, Xbox, MSN, and more.

Unlike Youtube, Rumble won’t hide specific videos from their search results. Rumble is a great option that allows users to publish their videos without being concealed from the Rumble audience.

For businesses, Rumble has a similar audience to Youtube. If you’ve had some success there, it’s worth taking a look at Rumble as an alternative social media channel to promote your products and services. www.rumble.com

The Future of Patriot Social Media is Happening Now

Has your business tried out any of these alternatives? We are about to see a digital revolution as people reject censorship. It might be time to get comfortable learning the ropes of social media sites like Parler, MeWe, Rumble, and Gab as our target audiences drop large social media platforms in protest.

This is a very volatile time with conservatives searching for new social media that won’t censor them or their influencers. This is also true of patriot businesses and general businesses that want to reach a conservative audience. With attacks that result in banned accounts, hacked servers, and slow response times due to massive numbers of new users, we are watching this constantly and will keep you up to date, This will be either by editing this blog or writing new ones. For cybersecurity reasons we don’t allow comments, but you can email us questions or comments.